An Old Project Coming Back to Life

With the Legio Malaysia Birthday Bash just around the corner, I decided this week to take a temporary break from my Iyanden army and get two things accomplished:

1) Make sure everything is ready for Saturday

2) Paint an entry for Golden Kris

Foolishly, I decided to try painting a Leman Russ battle tank from my upcoming Death Korps of Krieg army. If you recall from the ancient days when I first launched Adeptus Malaysia, I had actually started on it a long time ago:

I had this sitting on my hobby shelf since March of last year. Does the paint scheme remind you of a certain someone's Siege of Vraks Legends project...? Yes, it's the same scheme.

For those who don't know what I'm muttering about, a friend and fellow competitor Alvin is currently working on a Chaos IG project the uses the exact same camo scheme. If you don't believe me, check it out here:

Well, since he's doing something with it, and I don't want to be "that guy" and "copy" his scheme, I decided to repaint the model and go with something a little more appropriate for my planned desert theme. Here's the start, which includes the basecoat and a bit of shading: 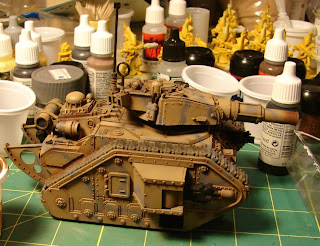 What do you guys think? If I could've finished it, I wouldn't have posted it. I'd have unveiled it at the Golden Kris. However, it's clear I can't finish it in time with the paintjob that I want, so I figured "Why not post it?". I still have a lot of weathering, decal, and other detail work to do, but you get the picture of what I'm after in this photo. I dig it.

That's it for tonight. Iyanden madness will resume Sunday night with the second Wraithguard squad. For those attending Hobby Night tomorrow, I'll see you there!