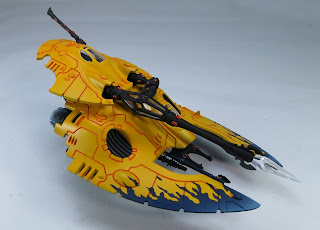 After almost a year of Flames of War madness, I've decided to pop back into 28mm stuff and have some fun with 40K. I've been thinking about different projects I could do for the upcoming Iron Painter, and one of them was doing a nice addition to my Wraithguard-heavy Iyanden Eldar army. So, I took a whack at doing a Fire Prism and this is how it turned out. 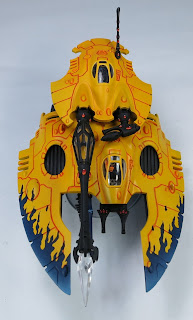 Given the modest amount of effort behind it, I'm really pleased. I used the same palette and methods as I did previously, with the only difference being the black/blue/light blue gradient. Thanks to the mighty airbrush it was actually pretty easy all things considered. However, it was a fair amount of hassle given the number of pieces I had to keep it in until the very end. 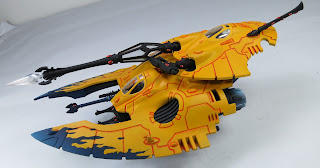 So, up next is a Tau test. I'm going for a very clean, non weathered look for these guys, using a primary palette of green, black, and white. I'll get some pics up this week and you can tell me what you think.

As always, comments are most welcome- thanks for checking it out.
Posted by deathkorps at 8:36 PM 9 comments: