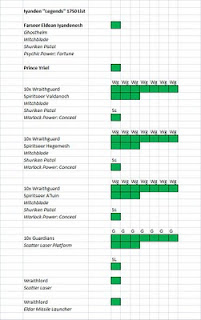 WOO HOO! I'm done! I finished the Farseer about an hour ago. Here he is... 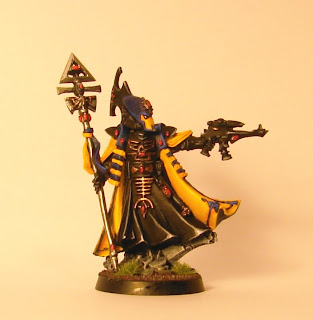 I decided on a strong black theme, with the idea of matching Prince Yriel a bit. I figure if he's black and "in charge", the Farseer should reflect the same thing. Blue and yellow are still very prominent, but the black and metallic colors tie the Farseer in with Yriel nicely. At least, I think so!

It's not the greatest shot, but here's the entire, completed army in all its glory:

It feels good, folks! Six weeks of pretty solid effort have resulted in an army that I'd play anytime without reservation. This Friday, I've got my first matchup against Azlan and his dread Thousand Sons Chaos Space Marines. Wish me luck!
Posted by deathkorps at 11:29 PM

Email ThisBlogThis!Share to TwitterShare to FacebookShare to Pinterest
Labels: Iyanden