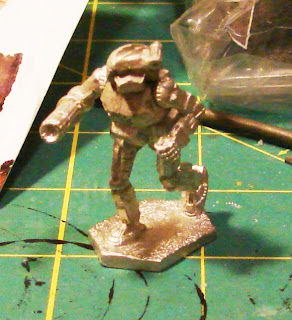 Recognize this? In case you don't, this is a VND-3L Vindicator Battlemech, one of several other 'mechs I recently picked up from the nice chaps at Noble Knight Games. Almost to the month, it's been exactly 20 years since I last played a game of Battletech. WOW.

Kai, a member of the staff here at Battlefront, has also picked up some 'mechs. We're going to get them painted up, and have some retro fun within the next couple of hobby nights. I'm actually really excited to play again- we're keeping it "old school" and playing The Succession Wars era of the Battletech timeline. So, no clan or wacky weirdness like that.

Before you all groan and roll your eyes, no, I haven't forgotten about Krieg at all. These 'mechs will take me a few days at most to knock out, and once they are done I'm straight on to the Death Korps. However, this is a nice "treat" or diversion from the Iyanden grind I just finished, and for minimal effort I'll have a nice little Davion-aligned mercenary company (fluff as yet undetermined) to play some games with. If you're interested and game here locally, by all means grab your 'mechs and come on down to play. At the very least, it should be an awesome stroll down memory lane...
Posted by deathkorps at 11:20 PM

Email ThisBlogThis!Share to TwitterShare to FacebookShare to Pinterest
Labels: Battletech