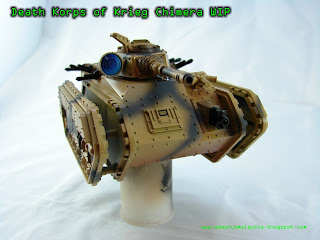 Got some more progress done with my Chimera tonight. I got rid of the horrible white ID stripes without too much trouble. While I had the airbrush out, I went ahead and painted the searchlight. I'm pleased with the result- all I had to do afterwards was paint on a couple of small white spots for reflection. Good times.

Here's a profile shot as it stands right now: 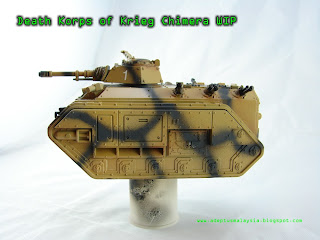 Below is what I'm thinking of doing for the identification markings. "15" is for the 15th Company, the black color is for 1st Platoon, and the "1" on the turret is for 1st Squad. 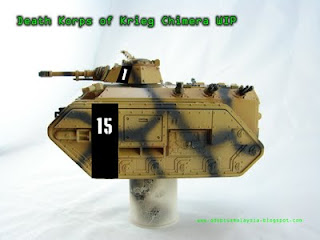 Thoughts? Comments? This look cool to you...?
Posted by deathkorps at 11:26 PM 3 comments: 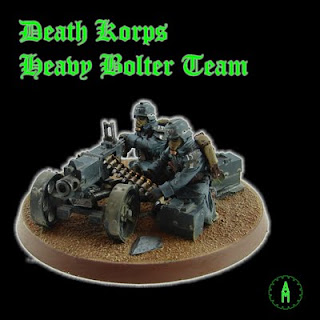 I'm really pleased with how this came out. I did quite a few thin washes of umber/light grey for the dust effects, and I like the results. If I can keep this progress going, this army is going to FINALLY come together in the next few months!

Tomorrow it's assembly of the platoon command squad, and some conversion work. For my Chimeras, I'm planning on converting two or three port firing lasguns to have have protective chemical hoods on them. I also want to convert a backup compressor with a couple of hoses for the exterior of the track, to make sure the fighting compartment remains overpressurized in case of a chemical attack. I'm also thinking of taking pintle-mounted heavy stubbers with all six Chimera, but actually repping/converting them as coaxial MGs for the autocannon turret. What do you think?
Posted by deathkorps at 9:16 PM 1 comment:

Back in Action After Nurgle's Rot 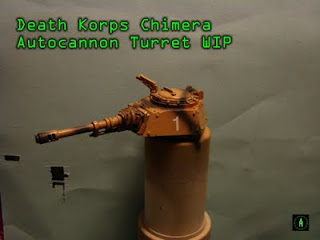 I spent a good chunk of last week, along with the whole weekend, sick in bed for the most part. However, after imbibing potions that my Unclean troops kindly supplied me, I am on the mend. Enough, in fact, to get a bit of progress done.

Tonight I put on decals for 1st Squad's Chimera, and painted a little on the turret. I still have quite a bit more work to do with shading and weathering, but I think it's headed in the right direction...
Posted by deathkorps at 11:36 PM 1 comment: 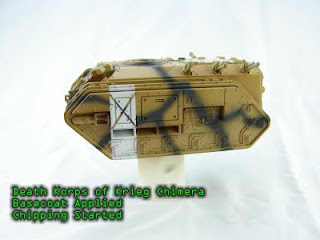 Just finished the basecoat and camo pattern (needs a bit of touchup actually), and masked off/painted the ID stripes. I'm still not 100% convinced that this is the final scheme, but I'm going to go ahead and completely finish the paint job before I pass final judgement. Basecoat is Tamiya Desert Yellow airbrushed over Mr Surfacer Light Grey Primer, with VMC German Grey camo stripes. ID bands are Tamiya White. 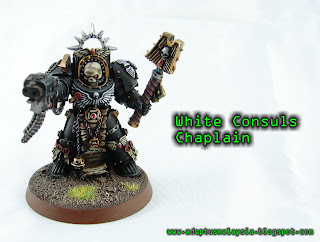 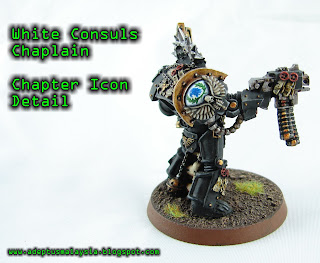 Next two pics are a bit random- a Chaplain I painted up a while back for a White Consuls army project that never really got off the ground. The Serpent's Lair, one of my favorite 40K forums, is running an HQ painting contest and I thought I'd make this my entry. Unfortunately, I don't have an Alpha Legion HQ choice painted up, so this will have to do.

Not a whole lot of hobby tonight- the Chimera paint job was started yesterday during the Wesak Day public holiday here. I'll resume work on it tomorrow evening assuming I feel up to it. Until then...
Posted by deathkorps at 10:25 PM 3 comments:

Squad's Done, so Time to Work on the Transport

Due to the REALLY expensive bill of doing a resin-heavy Siege list, I've decided to start my Krieg project as a 1500 point Armored Regiment. With my HQ, Infantry Platoon, and Veteran squad, I'll need six Chimeras to finish this. I have seven on the shelf from previous projects, so I'll kill two birds with one stone and get some serious armored overstock built and painted with this project.

However, being Krieg, I thought I should make a few minor conversions to the Chimeras to reflect the nature of the army they serve in. Yesterday, I posted about the port firing lasgun covers, and today I've got more to show. 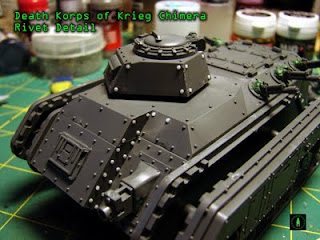 In addition to drilling out all of the weapon barrels, I also added rivet detail. I used 1mm styrene rod, which is not a 100% match but close enough. 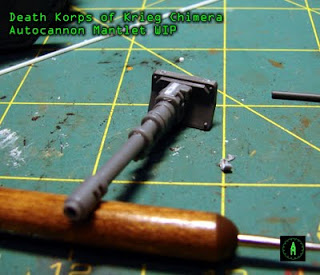 One of the great things about the new Chimera kit is the choice of turret weapons. Parts are provided to have the standard multilaser, but you also have parts to choose either a heavy bolter or a heavy flamer. The heavy bolter option comes with its own mantlet, while a completely separate mantlet is provided to use with either the heavy flamer or multilaser.

My plan is to use autocannon turrets, referring to the ForgeWorld Imperial Armour rules. Now, of course, you might rightly point out that this is not "tournament legal", as the Imperial Guard codex does not offer the autocannon as a choice. I realize this, but I like autocannons, and my approach to the hobby has always been a figure-centric version. However, in the event I play against someone who is unhappy with the autocannon option, I've magnetized the turret and mantlets to use either the heavy bolter or the autocannon option I've converted here. 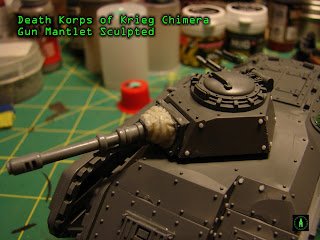 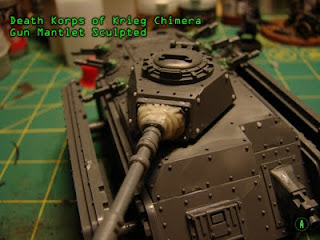 After gluing the cut-up autocannon on the spare mantlet (from the IG Heavy Weapons sprue), I went ahead and used Apoxie Sculpt to model up a mantlet cover. This hides the conversion work, and I think is also evocative of the overall Krieg aesthetic. I'm happy with it, and I think it'll paint up great.

The last thing I want to do for all my armor is model them up with sand channels attached. Since I'm going for a desert theme with my bases and weathering, it makes sense to include these. I'll probably make a master from plasticard and a punch, and then mold it up to cast in resin. My tanks won't get stuck in the sand!

This week I'll start painting. Extra bits like the searchlight, smoke launchers, and door handles on the top troop access hatches will be painted separately and attached at the end. I'm doing this to facilitate masking later on. By week's end I should have some pics up and be well on my way to finishing it. Until next time...
Posted by deathkorps at 7:57 PM 4 comments: 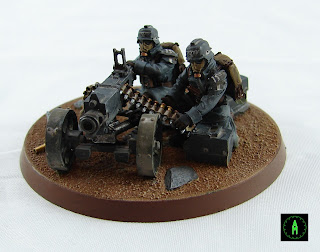 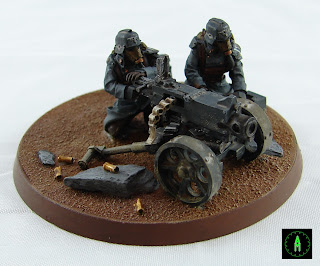 I posted these Thursday night, but with the recent Blogger service loss it looks like that post is shot. Khairul, many thanks for the suggestion on including spent brass casings- much cooler!

Today I also tried sculpting gas-proof "covers" on all of the port firing lasguns. If these work out once they are painted, I'll probably make a set of masters and cast them up in resin to make the remaining Chimeras easier to build. 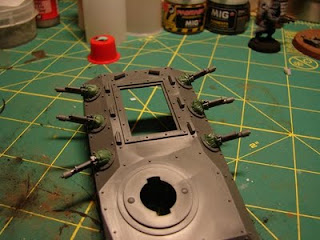 Hopefully this post actually stays up...!
Posted by deathkorps at 1:06 AM No comments:

Sorry no pic tonight, but I thought I'd mention that the entire team and weapon were undercoated with resin primer, and then basecoated with Tamiya Flat Black. I then airbrushed Model Air Primer Grey on the weapon crew's greatcoats.

After that I managed to basecoat their pants, ankle wrappings, gas masks, bedrolls, gloves, helmet, and shoulder armor. With any luck, I'll get this team done tomorrow night...
Posted by deathkorps at 11:08 PM No comments: 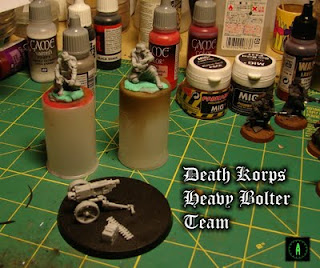 Was a bit tired tonight, and only managed to assemble the team. I've kept the heavy bolter axle, carriage, and weapon separate to make painting easier. There's a ton of cool detail there that I want to make sure gets the attention it deserves!

With any luck, I'll get this painted tomorrow!
Posted by deathkorps at 11:04 PM 3 comments: 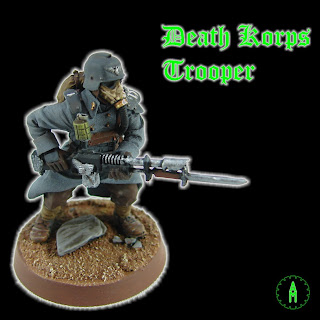 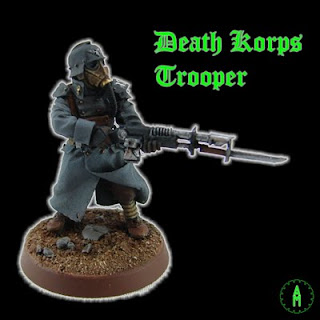 All that remains to finish the first complete squad is the heavy bolter team, which I'm going to start on next week. After that, I'll be converting and painting their Chimera transport.

I've got my light tent set up, and it's yielding MUCH better pics! 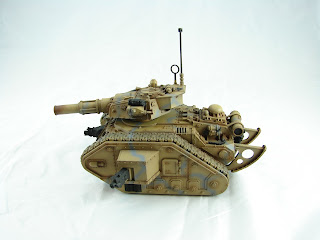 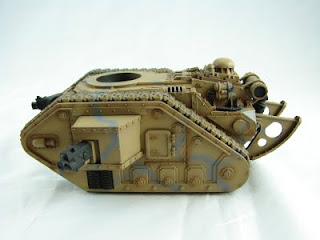 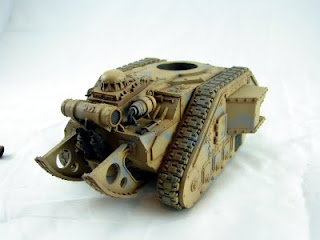 Why pictures of my basecoated Leman Russ WIP? Well, I cringe to say this, but I'm going to pull another hobby "flip flop" and resume work on my Death Korps of Krieg. I'm really excited about the recent DVD tutorials I've watched, and I've got an idea for a DKoK "Missile Launcher" in the works as well.

I know, I know. Don't pelt me with too many e-stones. What can I say? This is my fun time, I don't have a tourney coming up, and I want to work on my Death Korps! :P

So, at tomorrow's Hobby Night I will be bringing a trooper to paint, and a heavy weapons team to assemble and start painting. Once those are done, I'll have a full 10 man squad finished. Huzzah! After that, it's Leman Russ time...

Whatever your views on my wishy-washy hobby work, whaddya think of the new pics?
Posted by deathkorps at 10:55 PM 3 comments:

This past weekend I took a mini vacation in Singapore with my lovely wife. Besides all the "luvvy duvvy" couples fun stuff, I made a stop at "Storm Domain". This place is a serious modelling shop, and inside they showed me a couple of DVDs that I quickly scooped up. Both are great, but this Vallejo DVD in particular warrants a quick review on this blog.

Most of the modellers I know only work with acrylic paints. There are pros and cons to this approach, but for the most part it boils down to what we have been introduced to. Most of us in the Legio crowd have been building and painting GW models, and have been using acrylics to paint them. Keeping that in mind, this is a MUST HAVE DVD for anyone serious about painting tanks. It covers in great detail the following things:

...and more, including a great clip at the end of an actual Panzer II driving around!

I've watched this twice already, and I have absolutely learned some new things that I will be adding to my arsenal of tank madness with upcoming projets (in particular Krieg)

The DVD takes you start to finish painting a German Panzer II, including hyper-detailed weathering and finishing at the very end. Every technique and product it features is a water-based acrylic product. No oils. No enamels. No turpentine or other smelly chemicals. Just stuff that most of us have used or would use at one time or another.

If this sounds like your cup o' tea, I recommend you get yourself this DVD. Storm Domain are happy to ship to Malaysian customers, and Maelstrom carries this DVD in stock as well. Either way, grab it. You won't regret it.
Posted by deathkorps at 11:05 PM 4 comments: