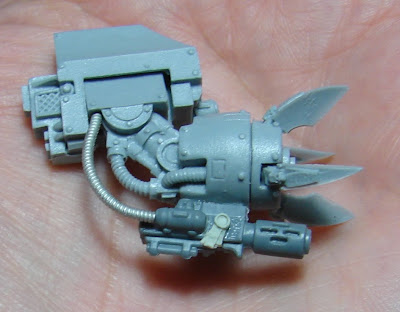 This is Forge World's MkIV Dreadnought Right Close Combat weapon, converted for use as the right CCW of a Furioso Dreadnought. The meltagun is from the Space Marine Commander's combi-melta. I used it because it's a little more compact than a full sized meltagun- in my mind it's just right.

I added a Forge World purity seal to cover up the spot where I cut some detail off. In that spot there used to be a skull, but since it would be upside down from that perspective it had to go. To complete the conversion I used a length of white metal tubing I purchased from Dragonforge Design. They make all kinds of cool stuff there which you'll occasionally see pop up in my blog. Drop by for a visit- you won't be disappointed.

I also have worked on my Chaplain bit by bit over the last few days, and have assembled a few more assault marines. So far, I've kept up the daily effort. Slowly but surely, this project is getting done.

This is an event I'm really looking forward to, since I'm competing this time instead of working behind the scenes. I'll be painting Eldar from the Iyanden Craftworld, a Craftworld devastated by the Tyranids and on the edge of extinction. Because of this, they make extensive use of wraith contructs, and these will feature heavily in my army. Here's what I'll be painting for Iron Painter:

I'm going to design some custom bases for the army based on the cool GW plastic Eldar Wraithlord base. I'll make molds of everything to make the process a bit easier, and to have the ability to cast more later for add ons. I've decided that all of my Wraithguard will be mounted on 40mm bases instead of the 25mm bases they are provided with. I really think they look 100% better on 40mm bases due to their large size. Hopefully if I ever use this army in a tournament or event run by someone else they will permit it.

I'll get a test model done, and verify the paint job can be done quickly enough to make it feasible for speed painting. Of course, I'll post that puppy up once it's done.

That's about it for today. I hope any projects you all might be working on are progressing to your satisfaction. Post here and let us all know about it! :)
Posted by deathkorps at 8:23 PM