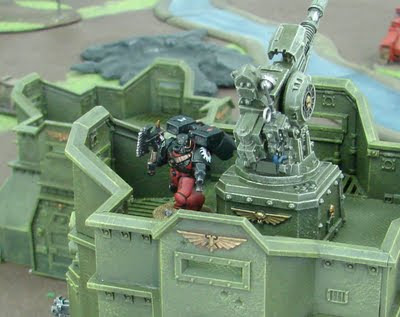 Not the greatest shot, but it'll do.

The Imperial chainaxe (ooooh I love typing that!) is from the ForgeWorld Berzerker Chainaxes pack. I'm not going to use the "curvy" axes, as they look a bit TOO Chaos. The angular ones are up for grabs, and I'll sprinkle those throughout the army. On the side of the axe blade you can't see, I've glued and painted white a brass Imperial Eagle.

The armor is basecoated Mechrite Red, with some basic Blood Red edge highlights. Still not sold on this shade of red, and I'll definitely do at least one more model with a different shade for comparison. In the meantime, what do you all think?

The bases will be a desert theme- painted Bestial Brown, heavy drybrush/overbrush Bubonic Brown, medium Bleached Bone drybrush to finish it off. Texture is just fine sand, with a few bits of broken cork here and there for "rocks". The rocks get a Codex Grey basecoat and Fortress Grey drybrush.

Right knee pads will have squad numbers (in this case 1st Squad), as will the top right of the jump packs. On the top left of the jump pack will be the company symbol (in this case 1st Company represented by one red blood drop. Oh, and before you complain this guy's not painted as a vet, the Flesh Tearers don't have a veteran company- their vets are mixed in with the four line companies).

Left shoulder pad is the GW metal one- I grabbed a bag of those in Baltimore when I still worked for GW, and I've held on to them a long time. I'm glad I did. Right shoulder pad is the GW metal assault squad pad. After finishing the model, I quickly realized this was a mistake. All Flesh Tearers are ready to fulfill any role needed, and the assault squad icon is a bit too regimented. I think the best thing to put there instead is one blood drop for his company. What do you guys think?

Helmet is a Chaos Space Marine one- vicious looking without the horns and other wicked stuff that would go too far (at least for my tastes).

Finally, I have to admit something a bit embarassing. This model actually isn't finished. I meant to paint the chest skull gold and the jump pack harness Oily Steel. The Tin Bitz you see was just a basecoat, and I completely spaced that. I guess I'm just a bit tired this week, so go easy.

Other than that gaffe, what do you guys think of the scheme?
Posted by deathkorps at 1:47 PM