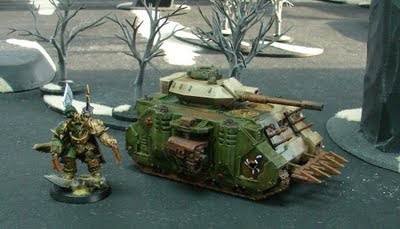 I have to say, every Hobby Night seems to be better than the last. I had a great time hanging out with Iqbal and Ivan, hobbying away on the final model of my army. I'm pleased to say that I managed to assemble, prime, and basecoat the Chaos Rhino at Hobby Night, and I dipped it this morning. That now means that every single model in my new army has at least been assembled and primed. Surely, a worthy milestone in my budding service to the Plague Father.

I'll post up a Hobby Rush Report (HRR) later tonight. Today's goal is to get two Chaos Terminators basecoated and dipped. I think I'm going to save the last pack of plague zombies for later, as a "break" since they're much easier than Terminators or Plague Marines to finish.

I'm looking forward to the league, and for those also trying to get armies finished I sincerely wish you the best of luck. If you're working on a new army, or adding new units, and reading this blog, post a comment and let me know how your project is coming along. I love to hear about others in the same boat as me! :)

Keep it Stinky
Posted by deathkorps at 11:23 AM