I'm wrapping up about three hours of hobby/painting for the night, which is pretty badass for a weeknight in my book. I worked on two projects: Battletech and the Death Korps 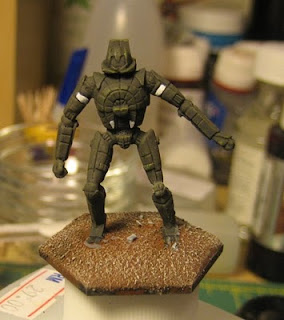 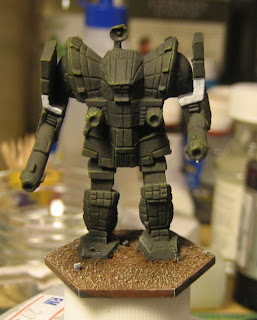 Last Friday's game against Kai was a blast! We duked it out with two 'mechs each- my Vindicator and Panther against his Hatchetman and Jenner. It was a tight battle, but in the end I got some lucky rolls and pulled out the win. At the end of the game, his Hatchetman was destroyed (Three engine criticals), and the left leg was blown off his Jenner by the Panther's particle cannon. Nice.

Tomorrow we want to play a bit larger of a game, so I painted up a Spider (the spindly, light one), and an Awesome (the one with lots of HUGE guns). Again, simple paint schemes. Ham and eggs goodness that will work on the tabletop... And yes, I did paint Bestial Brown on the rims of the bases to finish them off. I have no idea why I didn't wait until after I did that to take the pic. Chalk that one up to overeager stupidity.

I glued basing materials on two Guardsmen and my Watchmaster, and primed them up. I then fired up the airbrush and painted their greatcoats. So, they're all ready for tomorrow's brush work. I see no reason why these minis can't all be completely finished by the end of Hobby Night, save a final airbrushed matte varnish. I'll get pics up on Saturday of the finished minis, and you can tell me if you think the melta bomb conversion is feeble or not. Good times.

Finally, I want to wrap up tonight with an, "I love you babe!" out to my lovely wife Lena. We're celebrating our 2nd wedding anniversary (WOW!), and she got me this: 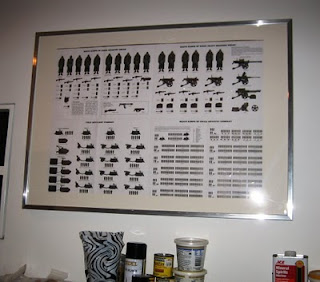 Seriously, how cool is that? With no input or hints from me, she noticed my penchant for Death Korps, got on the horn with ForgeWorld, and ordered this kick ass Krieg Infantry Company TO&E. She even framed it up by herself. She really supports my hobby madness, and this is really touching and cool. Lena, if you read this, know that I will think of you every time I look at this poster, along with mangled up bodies trapped in barbed wire and howling explosions. Good times. ;)

That's it for tonight folks. I wish you a most groovy evening and righteous hobby. Tune in over the next couple of days for some more Death Korps painted models- the 15th marches on...