Well, it's not what I had hoped for, but progress is progress. Here's a pic of what I did over this weekend: 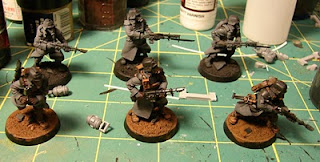 I didn't do a damn thing on Saturday except chill out.

Hang on a sec. Actually, that's not true. I did some righteous manly work on the house with power tools! I almost forgot!

I went out and got myself a drill bit for tiles, along with a couple of towel racks for my bathroom. The developer didn't put any on the wall in our house. We tried those suction cup towel racks- they blew. I remember sometime right after we moved in (late February), I went into an Ace hardware while Lena shopped in Guardian (local pharmacy chain in Malaysia for those who haven't heard of it). While in the Ace a little TV was playing infomercials about how kick ass these Korean suction cup towel racks are. "Guaranteed not to fall off!". Guarantee my balls. Oh well, I believed the delightfully androgynous Korean TV man, so I got what I deserve.

However, I triumphed with mighty power tools! I got two towel racks, carefully drilled some holes in the wall, pushed in some fiber plug things (no laughing you!), and got r' dun. Tools are awesome. DIY is awesome. My towels don't fall on the floor any more. Nice.

So, after my mighty manly stuff, I fired up the airbrush and basecoated the greatcoats. I then broke off half them and got all the base colors applied, all washes applied, and highlighted the leather. I should be able to finish them up tomorrow.

I'm off to bed, but I leave you with some power tool goodness. I hope your weekend kicked ass- I know mine did.