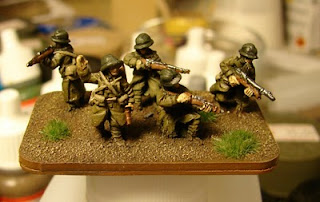 I think this definitely works for me. The uniform/greatcoat basecoat was airbrushed (VMC 879 Green Brown) on, and the rest was brushed on. After applying all the base colors, I simply applied a watered down VMC Brown Shade over the whole model, watered down Black Shade over the helmets, and then VMC Matte Varnish over the helmets once again (they were a bit shiny). NO highlights were painted on. The only thing I still want to do to this stand is glue on a couple of lighter green colored Silflor tufts. They're on the way from Europe, and as soon as they get here I'll add them and take a "final pic". In the meantime, I'm going to start motoring through this army.

Could the paintjob be better? Sure, definitely, and without a doubt. HOWEVER, this paint job will be more than sufficient for a nice table quality army, and it's dead easy to do. I'm really going to try and bust this army out pronto. In case you're wondering, this weekend "Blitzkrieg" hits the shelves of your local Flames of War stockist. This is a much anticipated hardcover book that will finally allow you to play the very beginning of WW II on the tabletop. Invasion of Poland? No problem. Conquest of France? Yep, the book's got that covered as well.

The models I'm painting don't actually hit the shelves until October, so I'm definitely getting an early start here. I really want to do this army, and you have to admit they bear a striking resemblance to my beloved Krieg miniatures. It's all good folks!

Who else is catching the Early War bug? The German Light Panzer company and British Armored Regiment come out this weekend as well, so you can just right into Early War. Join me, folks. It's gonna be sweet!
Posted by deathkorps at 11:42 PM