My First Experience With "3D Printing" 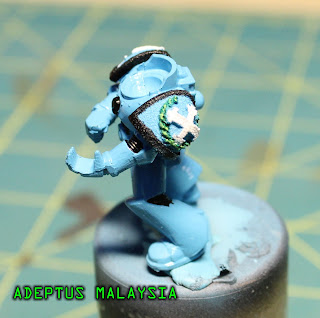 That's the first thing that came across my mind after getting the miniature painted up to this point. Sadly, it's a disappointing conclusion to my first experience with 3d printing that was in every other way phenomenal. Let me tell you all about it.

I've heard for a while now about outfits that use 3d printing / rapid prototyping technology. I've seen pics before that looked pretty good, so I thought I'd jump into the fray. In my first test model for this army, I used a mask to generate the Avenging Sons chapter icon. The results are fine, but ideally I want raised icons on the shoulder pads. They look damn sexy and add interest- I think most Space Marine hobbyists would agree on this point. I felt out a friend for some sculpting help, but he's pretty slammed and hasn't been able to help me thus far. My putty skills are improving, but I was a little leery trying it out myself. So, while checking out the 3d printing thing I stumbled across a blog post that referred to an outfit called "Shapeways".

They're basically a "Cafepress" type business- you upload your design, and they manufacture on demand. After checking out a bunch of 40k goodies on the site I came across the virtual store front of user "Dynath", called Dynath40K. He's got a bunch of great looking stuff there, and in his blurb he suggests folks send him a PM if they have a particular design in mind. So, I dropped him a line and explained all about my Avenging Sons project and what I wanted done, along with a quote request for how much the design would cost me.

He promptly replied in less than a day, saying he'd be happy to do it at no cost, and proceeded to put up exactly what I asked for- a plain Avenging Sons pad, one with laurels, and one with laurels and a cool "Duty, Honor, Vengeance" pauldron extension thingamabob. The designs are SWEET. I was thrilled, and ordered a full set of everything along with some of his existing shoulder pads for Tactical, Assault, and Devastator squads. Shipping was a but pricey, so rather than order in bits and pieces I did the whole thing at once (cue the foreboding music of a bad decision's looming consequences).

When you order your bits, you have to choose a printing material/resolution. The default one is called "White Strong and Flexible". Ten pads made of this material is priced at 3.81 euros, which is about RM 1.52 or USD 0.48 per pad. The highest resolution listed as "Frosted Ultra Detail" comes out to 8.75 euros per 10, which is about USD 1.11 or RM 3.50 per pad. Not thinking it would make a huge difference, I ordered the default "White Strong and Flexible", with the sandy/gritty results pictured in these two pics. These are not usable shoulder pads. 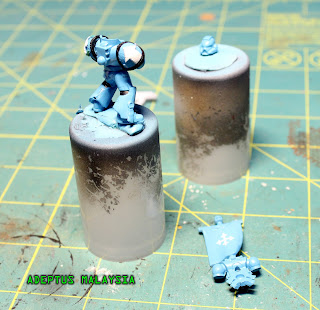 I blame myself for this- I should've asked around more, and made a small test order first to see the resolution. Dynath was a CHAMP, getting those designs done so fast, just like I wanted them in record time. I highly recommend his customer service to anyone looking for that special doohickey for their 40K army. In the meantime, maybe I can use these for a Taros PDF Imperial Guard or Tau force to decorate bases, and let the texture represent corrosion or dust. They will definitely not work for my finished army.

So, what to do next? I think I'll try out one pack of "Frosted Ultra Detail" and see how that works out. If it is reasonably smooth, I'd be fine ordering another set and calling the first one a learning experience. If they don't I've got to go back to begging for sculpting help, or spending some serious time taking a whack at doing it myself. More to come on that front.

Other than that, I'm ready to kick this project off with some serious assembly work. After reading "Brothers of the Snake", I really liked something the Iron Snakes squads do with the "shoulder banners". Rather than having the squad sergeant bearing it like they did back in the day, for the Iron Snakes one member of the squad is a standard bearer and bears it instead. I'm taking that concept and using it for my Avenging Sons. You don't see those banners get used much anymore, and it would be cool to try out some free hand icon painting with laurels, scrolls, and the like. This test next model will have that very thing...
Posted by deathkorps at 12:33 AM