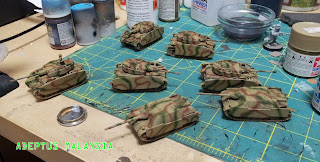 Had a productive night tonight, with priming and camo basecoat for the last part of my army. This is Biermeyer's Panzer IVH Platoon from the new "Grey Wolf" Eastern Front compilation, along with an SS Tank Hunter Platoon consisting of two Jagdpanzer IV/70 tracks. I've still got a ways to go, but I can see the light at the end of the tunnel for the campaign we're starting in a few weeks... Huzzah!
Posted by deathkorps at 11:31 PM