Hobby Rush for Season 3- "The Unclean"

Well, it's time to crank an army out. It's been too long since I went on a mad hobby rush, and with all the people blogging about it around here I figured I'd jump on the bandwagon and have a go. The goal? Assemble and paint the following list in time for the first night of the league, October 2nd: 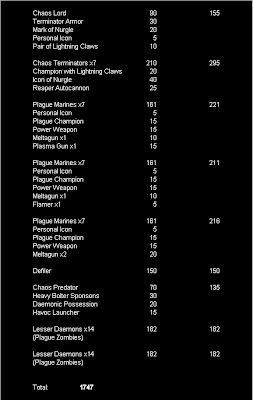 I've assembled most of this already- I just need to put together 10 more Plague Marines and about 8 or 9 plague victims/lesser demons. I'm going with the new, high contrast paintjob I posted earlier. The other one might look marginally more rotten, but I like the pop of the new version. This will be a challenge- I need to average 15 models a week to get this done on time. I'll keep making updates and posting progress as I go along.

P.S. In case you're one of those hobby guys that likes a bit of background, here's my first draft of "The Unclean" concept... Cheers


Background History for “The Unclean”
Warband Essentials:
“The Unclean” are a Chaos Space Marine warband/company who has utterly dedicated itself to the worship and service of Nurgle. Commanded by Lord Minthras, The Unclean has become a blight on the Effadian Sector, Segmentum Obscurus since 831.M41. Little is known about them, but it is suspected that Minthras and his praetorian were originally loyal Astartes from the Angels of Redemption, and that they currently number almost 200 Astartes with many more traitors, mutants, and even daemons in their service. They have also become known for spreading a virulent, warp-spawned disease known as “The Restless Blight”, or simply “The Blight”. The last sighting of The Unclean was in 847.M41, after making a devastating attack on the principle city of Baalor Tertius, “Marcellus Magna”. They were tracked there by the rogue Inquisitor Heilegon, who has not been heard from since.

The Beginning
In 819.M41, a major Imperial crusade was launched to liberate three worlds in the Guljor Sub-Sector, Effadian Sector. Appointed by Governor Subsector Maximillian Wroth, Lord Militant Euminides was invested with a fleet and 4 Imperial Guard Army groups to retake the “Harvest Worlds” of Pindus, Agriminnus, and Koth from a sudden Chaos incursion. These worlds were a vital source of foodstuffs and Imperial Guard levies, and their loss was keenly felt almost immediately after they were lost in 793.M41. Little was known about the nature of the conquerors, save that they were led by a fiery demagogue calling himself “The Wormchylde”.
Due to the nature of the enemy Euminides was about to face, Lord Governor Wroth convinced the Ordos Effadian to send one of their agents. Equally concerned about the nature of the threat, the Inquisition sent Inquisitor Jesper Heilegon. A junior member of the Effadian Ordo Malleus only recently promoted from Interrogator rank, Heilegon embraced this new assignment and joined Euminides’ fleet in the merchant vessel Brightness.
In addition to the Imperial Guard forces at his command, Lord Militant Euminides petitioned Space Marines of the Angels of Redemption chapter for aid. It is not clear how Euminides was able to convince the Angels of Redemption to assist him, but a strike force led by Brother Captain Gregori Minthras was immediately dispatched by the reclusive chapter. By the time Lord Militant Euminides’ force arrived in the Koth system, Captain Minthras had already arrived and gathered enough information for an initial assessment of enemy strengths. “The Wormchylde”, it seemed, had total control of the Harvest Worlds. His forces numbered in the millions, and all loyal resistance had long since collapsed. However, no enemy fleet was present, and a blockade of the Harvest World was quickly established while the first action against the Chaos forces was planned by Euminides and Heilegon. Before these plans could bear fruit, Captain Minthras struck the first blow.

The Pindus Drop
Unknown to Lord Militant Euminides, “The Wormchylde” is the sole reason the Angels of Redemption had agreed to “aid” him. Had “The Wormchylde” not been mentioned, Euminides’ request would have been dismissed and subsequently ignored. However, the Deathwing of the Angels of Redemption knew that this “Wormchylde” one of “The Fallen.” In the secret records of the chapter, “The Wormchylde” is a known alias of Brother Borsa, who was a former sergeant and honor guard to none other than Lord Luther of the Dark Angels. His name and repentance would make a fine addition to the honors of the Angels of Redemption, and they sent 3rd Company Captain Minthras with the sole mission of finding and capturing Borsa. To the Angels of Redemption and Minthras, the agendas of Euminides and Heilegon were irrelevant. Borsa was the only thing that mattered.
To this end, after deploying his Ravenwing detachments, Minthras discovered that Borsa had fortified himself in an ancient coastal fortress on the northern continent of Pindus. Armed with this knowledge, Minthras ordered an immediate attack via drop pod assault into the heart of the fortress. He left one of his trusted sergeants, Brother Demeter, behind with an honor guard squad to attend Lord Militant Euminides and keep him from meddling in their affairs. Reluctantly, Demeter heeded Minthras’ command and joined Euminides’ fleet in the strike cruiser Lux Angelis. Meanwhile, Captain Minthras launched his attack with a furious orbital bombardment from the battle barge Triumphant, followed by his planned drop into the midst of the enemy.
The Agriminnus and Koth Campaigns
Upon learning of Captain Minthras’ sudden attack, Euminides weighed his options. He did not rise to the rank of Lord Militant solely through familial and political connections. Possessing a cold, calculating pragmatism that sought victory in any circumstance, Euminides kept his head where others allowed their choler to take over. Seeing a chance for sudden victory, Euminides made a bold move by splitting up his crusade army. His main force including Army Groups Aimon, Ganges, and Wor’sha would attack Koth, the primary planet and seat of governance in the system. Meanwhile, Heilegon took command of the newly named Army Group Heilegon, composed mostly of Krieg and Mordian armored regiments, and assaulted Agriminnus. Euminides gambled that Agriminnus would fall quickly if struck hard and fast, and after getting a measure of Inquisitor Heilegon, he believed the Inquisitor could get the job done.
As it came to be known afterwards, the “Heilegon Gambit” worked. Agriminnus and Koth were both taken in less than a week after only token resistance was offered. Most of the enemy forces were composed of ill trained, indentured peasants that had been easily swayed by the Wormchylde’s promises of freedom and end to bondage. Thinking their long labors on grueling agri-complexes were at end, the peasants took up arms woefully unprepared for the might of the Imperial fist. After punitive purges and decimations were completed to Euminides’ satisfaction, Koth and Agriminnus were quickly restored to Imperial rule, along with their vital foodstuff exports.


The Fate of Pindus
Soon after Minthras’ attack, all communications with the strike force were lost. Once the main fleet established orbit around Pindus, Euminides discovered that the Triumphant was gone- it was not in orbit, and all efforts to raise the vessel on intersystem vox met with failure. Despite all this, Sergeant Demeter managed to keep Euminides from attacking Pindus for almost two weeks, insisting that Captain Minthras would find victory there on his own. However, in the end, even the Astartes could not keep a Lord Militant at bay, and Euminides launched his own assault, landing the bulk of his main and reserve forces in the northern continent in support of Minthras’ last known position. Initial landings went according to plan, but the first reports from the surface were shocking. Incredibly vast plains of endless grain fields were instead replaced with rotting bogs and swamps. Unidentifiable gibberish polluted the vox nets, rendering them almost useless. Many units failed to report initially, and were never heard from again. Worst of all ground forces were still unable to raise Captain Minthras. Sensing things were much different on Pindus, Inquisitor Heilegon sent down his senior Interrogator, Mobion, to the planet to investigate.
As for exactly what happened on Pindus afterwards, few can say with certainty. What is known is that soon after Heilegon’s Interrogator left for the planet, the fleet in orbit received a transmission from the surface. The vox signal source was clearly identified as coming from the coastal fortress that Minthras attacked.
“The Worm is dead by my hand, and I shall never die.”
Imperial ground forces reached the fortress soon after, and entered unopposed. Reports stated that bodies were everywhere, and that disease was beginning to spread throughout the army. No sign of Captain Minthras or his cohort were found by ground forces, nor were any Space Marine corpses discovered. Interrogator Mobion reported in directly to Heilegon on an encoded vox channel as well, presumably with his own findings from the surface. There is no record of what information was passed to Inquisitor Heilegon, but immediately afterwards Heilegon managed to contact the Ordos and get a writ of Exterminatus immediately sanctioned. No forces, including Interrogator Mobion, were permitted to evacuate the planet, and upon receipt of official sanction Heilegon deployed a massive tectonic warhead from the hold of the Brightness, completely destroying the planet in volcanic fires and detonations. Sergeant Demeter and his squad departed the system soon after with scarcely a word spoken. With this action, the Euminides Crusade was declared complete on 820.M41.
The Aftermath
Upon completion of the “Pindus Affair”, Inquisitor Heilegon repeatedly tried to get the Ordos Effadian to start a full investigation into what happened to Captain Minthras and his men, and whether Minthras may have turned traitor. Pressures from the Inquisition Terra and the Angels of Redemption prevented this from happening, and after 4 years of unsuccessful petitions Inquisitor Heilegon declared himself on “Special Condition” and disappeared, presumably to investigate the matter himself.
As for Minthras, nothing that can be corroborated has been heard. Evidence of Traitor Astartes attacks throughout the Effadian sub-sector began surfacing in 827.M41, first in small raids, and then over the years in larger and bolder actions. Bearing many of the signs of the Death Guard, what few witnesses have survived or been captured have described a force calling itself “The Unclean”, led by a “Lord Minthras”. When questioned about the apparent connection with Captain Minthras, the Angels of Redemption have vigorously denied any allegations that Captain Minthras is somehow involved. However, forces from the Angels of Vengeance and the Dark Angels have been spotted throughout the sub-sector since the attacks began in earnest. What the connection there may be remains a mystery, as does the whereabouts of Inquisitor Heilegon and Captain Minthras.
Posted by deathkorps at 10:28 AM