You know what, let's try something besides 40K for the next Hobby Report 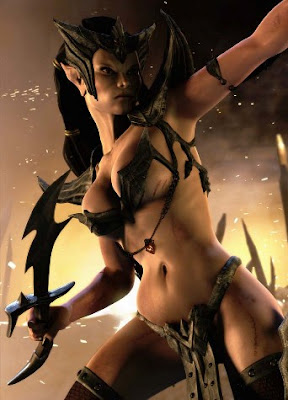 After much consideration, I've decided that instead of immediately leaping into Flesh Tearers or Iyanden Eldar I'm going to do something else. I saw that GW put up preorders for the new Skaven stuff, and it all looks fantastic. Warhammer is a great game, and I think it's time for a new army. Dark Elves!

I love the new model range for them, particularly the Cold Ones. I've played VC for too long now, and I need some variety. I also want to play an army that's actually painted well, and my VC definitely do not tick that box. So, the next series of Hobby Reports will detail the progress of my brand spankin' new Dark Elf army.

I currently have a Battalion box, a Dreadlord, and a couple of Reaper Bolt Throwers. So, I'll start will building and painting that stuff up first. I also want a Cold One Chariot and some Witch Elves (pictured above- so naughty!). After that I'll play it by ear with some test games and careful thought. The goal is to get this done before the end of the year. It's not a Hobby Rush, but it is a fairly tight timeline for a Warhammer army. Progress starts tonight, and I'll post regular updates like I did with The Unclean. I'm working on a 1K list first so I can play some small games ASAP- that list goes up tonight as well.

Keep it Evil
Posted by deathkorps at 9:38 AM