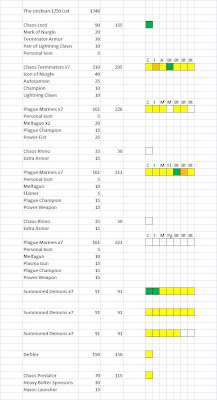 Well, it's safe to say that I haven't achieved everything I would have liked in the last two days. However, some work was done, which is better than nothing.

I've designed and made my first set of Chaos Rhino Extra Armor plating. I think it's a good first effort, and I've even enscribed chaos litanies and Unclean symbols on them. I'll assemble a Rhino this weekend and try to get it painted up.

I basecoated and dipped my Chaos Terminator Icon Bearer- he looks pretty damn cool at this stage, so I'm hoping he stays that way.

Finally, I assembled two more Plague Marines including another icon bearer. He's staring up at the icon stickin' his tongue out- I dig that dude. I hope he kicks some ass in the league...

Anyway, that's about it. Tomorrow the plan is to get back to the plague zombies and get enough basecoated and dipped to make myself feel good and get that "Models Remaining" number down.