"The Dip"- Evil Deed or Mad Genius? You be the Judge 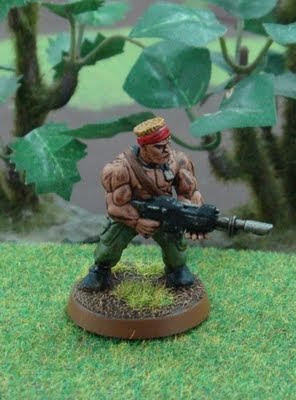 Well, last night I decided to completely finish the initial test models of two different armies. For both armies I'm employing what many call "The Dip"- a varnish coat of Minwax wood stain over a basecoat. I'll describe each, and you can see for yourself.

First, I completed a test model for my SPORE 2010 army- Vietnam-themed Catachans. That's the guy at the top of the page there. It's a mostly foot slogging force with no tanks, whose armor support will come from several Sentinels and one Vendetta. I'm building this force in conjunction with Azlan to make one big "Uber Catachan" army. It's a project I'm looking forward to completing.

Now, as a disclaimer, I must say that the top half of the miniature was coated in a different, much darker varnish then the lower half. I'm sure you'll agree he looks a bit dingy/dirty, but he'll be usable in the end.

Over a black undercoat, I painted the fatigues Gnarloc Green, the skin Tallarn Flesh, hair Iyanden Darksun, bandana Blood Red, and all the leather Calthan Brown. Metal was quickly drybrushed with Boltgun Metal. No attempt was made to do any highlighting or shading whatsover. These were just painted on quickly- for this fig it took me about 15 minutes.

After that, I coated the upper torso in Minwax "Provincial", and the lower half in Minwax "Golden Oak". I let this completely dry over the course of 24 hours. After that, I painted the base Scorched Brown, drybrushed it with Bubonic Brown and then Bleached Bone, and then painted the rim Bestial Brown. I then sprayed the entire model with Tamiya Flat Clear spray. For the last touch, I put a couple of blobs of PVA on the base and pushed in some standard GW static grass.

I think the result is decent, taking into account the incorrect varnish for the top half. I'm going to assemble and basecoat another Catachan tonight, and this time I'll use Golden Oak for the entire thing. I'll post that pic and you can see the difference. I think this army will be sharp when it's all said and done, with a minimal amount of painting effort. :)

The next project I'm working on are "The Unclean", a Nurgle-devoted Chaos Space Marine force. They are former Angels of Redemption that have fallen to the depraved worship of the Plague Lord, so the paint job will still reflect a 50/50 green/bone split. You can see the final result below: 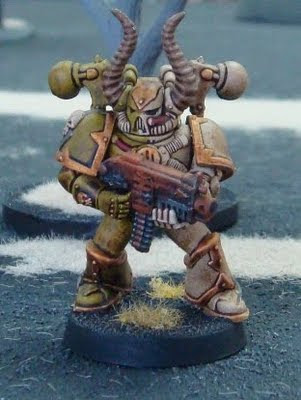 I am REALLY happy with this one. Here's what I did to get this:

I undercoated the model with Tamiya Flat White from my airbrush. I painted the right side of the fig with a simple basecoat of Camo Green. I painted various metal details in either Shining Gold or Boltgun Metal. A couple of cables got painted with Mechrite Red. The horns were painted with Khemri Brown, and finally I blacked out the eye sockets. This all took about 20 minutes. I then painted on a generous coat of Minwax Provincial and left the model to dry. Once it was dry, I sprayed it with Tamiya Flat Clear. 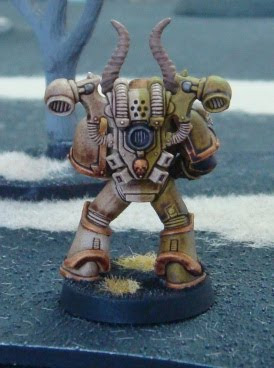 I painted the boltgun seperately, and it did not get the Minwax treatment. I undercoated it in black, and then drybrushed Boltgun Metal. I then stippled on rough patches of Dark Flesh, Vermin Brown, and then Macharius Solar Orange to simulate rust. This was glued on the model after the model was varnished, but before the matte varnish.

I then sanded the base, painted it black, and drybrushed it with Fortress Grey. A couple of blobs of PVA glue, and I added some GF9 dead tundra grass.

I'm really pleased with the overall result, especially given the time factor. Once I get batches going, I should be able to average three models an hour (not including drying time). For me, that's pretty fast to get these kinds of results. Once I get a squad done I'll post them in a pic all together, and you'll be able to see how "table standard" these guys look. For me, they pass muster. :)
Posted by deathkorps at 8:57 AM

Email ThisBlogThis!Share to TwitterShare to FacebookShare to Pinterest
Labels: Catachans, The Unclean