I did some organizing in my hobby room to make things easier to find, and I did a little hobbying. I finished assembling a Catachan squad sergeant, using a West Wind head with a steel pot helmet. He looks pretty cool. Tomorrow he gets primed black, basecoated, and dipped.

I also took an early Catachan test model and did a painting repair job for him. My first guy I tried I used Gretchin Green for the fatigues instead of Knarloc. This was not a good choice- the green was much too light and yellow. Azlan had it right, so we made the switch to Knarloc. So, I painted Knarloc straight over the old fatigues, and carefully restained them. They look great! Tomorrow I'll matte varnish and base him, assuming he's completely dry. I'll post a pic of what SHOULD be the final test/confirmation model. Much coolness.

As you can see, I also did some work on the Unclean... 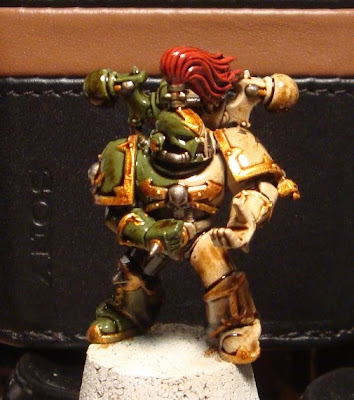 I couldn't get out of my mind that the Camo Green was just not contrasting enough with the bone finish. So, I cracked out Knarloc Green for the second time tonight and painted another test model, followed by the dip. I know he's still shiny, and I know he's not based or anything, but I personally think the contrast between the two sides is much better than the first version. I'll get this guy completely finished, and I'll take photos of the two side by side. We'll do a Pepsi Challenge here on Adeptus Malaysia and we can vote on it or something...!
Posted by deathkorps at 9:53 PM