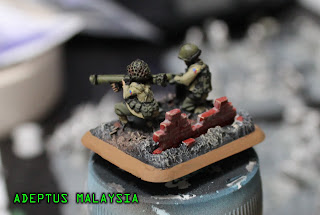 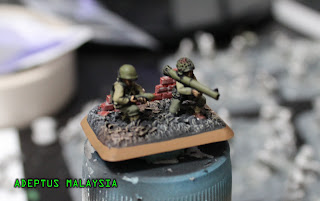 Hours away from finishing my SS Panzerkompanie, we found out that two out of the three Allied players we believed were going to play the Market Garden campaign have pulled out. This leaves us 4 German players and one Allied player for the campaign starting this Friday. So, I thought I'd go nuts and try to build and paint a 1000 point Armored Rifle Company in time for the campaign and switch sides.... yowsah.

In the last two days I've made more progress than I would have guessed. I've built all 11 half tracks I need, as well as 4 Shermans. I've also put together the HQ and the first platoon in full, leaving only second platoon to complete assembly. I used Battlefront's relatively new rubble plastic bases to help speed up assembly- they are a lifesaver.

The test paint job above has almost no highlighting on the figures other than black lining. I think it looks fine for the battlefield, and it's relatively quick. Here's the recipe:

1- Glue the figures into the base with enough super glue to get pushed up and fill the gaps/spill over a bit. Finely ground shale was sprinkled over all the super glue areas

It sounds like a lot, and maybe it is, but that's about as simple as I can make it other than the patch madness. What can I say, I'm not going to let Khairul get away with those eagles without a fight! ;)