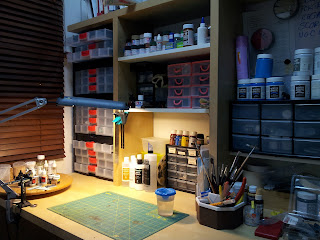 Like many of you, I've reflected over the last year and thought about what got done and what didn't. Hobby wise it was a solid year for me- nothing spectacular but nothing to be ashamed of either. After cleaning up and taking a pic of my hobby work area, I thought I'd share some of my favorite things from last year that I covered on AM (in no particular order):

2011 was the year I FINALLY got off my ass and made some serious progress getting the army painted. I took a completely different approach from my "ultra clean" paint jobs of the past and went for weathering and toned down highlighting. I'm really happy with what's done this far, especially the vehicles.

The first 1000 points was only finished a few days ago, and I'll have the remaining 500 points done within the next couple of days. I would've finished them over this weekend, but it was cleaning/organizing time (see above!) It's been a while since I got motivated to paint the little men, and our club's ongoing Market Garden campaign was just the ticket. Considering how quickly it's come together, I'm really happy with it.

While I'm no pro, I've learned a lot about editing videos and giving them a little production value. Our recent "Ghemehaal: Annihilation" 40K campaign featured video recaps that people seemed to like, though I'm embarrassed to say I haven't finished them all as of yet. Midway through I had severe computer problems, and since the campaign finished I've just run out of gas getting the last two done. However, if you haven't seen them yet take a quick look. You might dig it!

I also produced the first painting videos for Battlefront Miniatures, featuring a variety of stuff including tanks, terrain, and even a helicopter. I had a lot of fun doing them and helping launch the official Flames of War YouTube channel, and I'm sure one of these days I'll make some more painting vids for them.


So, what's the plan for next year? In broad strokes, here's what I'd like to get done:

I got a start on this almost a year ago, and I still want to do this. My meager sculpting skills have been improving, and I'm happy with the shoulder pads and purity seals I've done for the test models. Ideally I'll get a few local guys into this, and we'll do some kind of Great Crusade campaign. Cross your fingers...

There should be a tournament in March and SPORECon sometime in May or June, and I really need to get to both. The Singapore crew have been coming up to Legio Malaysia tournaments since we started them four years ago, and I'm ashamed to admit I haven't been down to a single Singapore tournament. I'm not huge on the tourney scene, but a social visit coupled with some dice rolling sounds pretty good to me. I gotta make this happen.

4. Get Into One New Game

Infinity? Mercs? Malifaux? All of those and many more have their charms, and I want to get into one of them this year. Suggestions, esp. the local guys?


I've got a couple other ideas, including Beastmen, Angels of Redemption, and some other madness, but these first four are the ones I really want to focus on. I'd love to hear any hobby resolutions you might have in the comments. I hope everyone reading this has a fantastic 2012- healthy, happy, and lots of boogie hobby. See you in a day or two with an M10 and M8 American update...
Posted by deathkorps at 12:08 AM