Quick but satisfying post tonight, folks. I've just finished this Panzer IVH Platoon, along with 2 Jagdpanzer IV tank hunters, which means my 3rd SS Panzerkompanie is DONE! Woo hoo! I've got two fully painted Flames of War armies completely finished. The Americans I blitzed through, but I've been working on my SS off and on for over a year. Looking back on this blog the first SS post I made was way back in May of 2010. Yowsah! 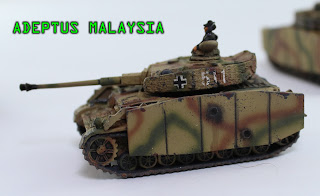 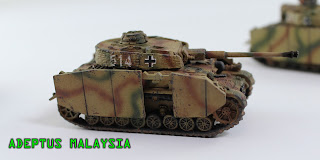 Regardless, this means I've got a late war army for both sides now. Much happiness! Sometime in March or April I'm going to bust out a Soviet tank army for our upcoming Bagration campaign on May 5th. That will be sweet. BTW, if you dig the paint job, check out the video below. I did it quite some time ago when we were first launching the Flames of War YouTube channel. The paint job I show in this video is pretty much the same thing I did here

In the meantime, it's back to 28mm for an upcoming event. Gameforge in Penang is running a Warhammer "Border Patrol" 500 point tournament. I had a ball at the last tournament they ran, so I'm going to finally start painting my Beastmen army to play with a brand new army in the tourney.

I'm going to try doing this army with "the dip", in this case Minwax 'Golden Oak'. I basecoated and dipped one Minotaur yesterday, but it's still a bit tacky this evening so it's not yet ready for the matte varnish and finishing up details. I'll post a pic of him this weekend for your perusal. He's more or less a test model, but so far I'm reasonably pleased with him. Until next time...
Posted by deathkorps at 10:07 PM