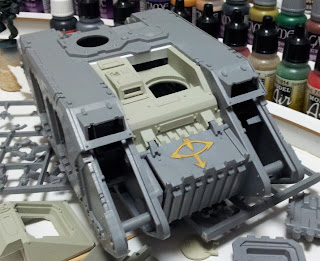 As cool as this thing should look when I'm all done with it, this thing is a real pain in the balls. The resin parts are comically ill fitting, requiring a great deal of bending, shaping, and general fussing about. As you can see from the pic above, the front resin hull part fits so badly that I had to make a plasticard shim just to get everything to butt up nicely and not have unsightly gaps. I've also got to make some ornamental rails to run along the edges of the upper assault ramp to hide the gap on the left. Ugh. 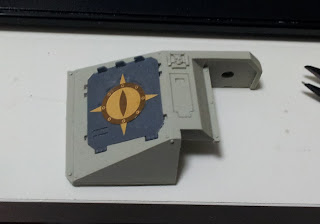 The resin sponson doors that came with the kit were the "Imperial Eagle" version rather than the plain ones I thought I had ordered. So, those had to go and get replaced with plastic doors from a Rhino kit. Both the resin and plastic doors are way too big for the sponson, so I had to do quite a bit of cutting and sanding to get the doors to fit properly. Still, after all the effort the assembly stuff is near completion.

With any luck we'll get this thing painted by the end of this weekend, and that will give me another week before the Heavy Support throwdown that I can use to play catchup with Legionaries I should've finished a couple months ago... :)
Posted by deathkorps at 10:09 PM