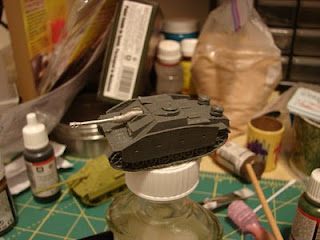 Well, after finishing up some work tonight, I did a little cleaning up around the hobby room and decided on my next Flames of War video project. I'm going to do an introductory "painting primer" for those new to painting Flames of War tanks, featuring the Shermans and StuGs that we include in our "Open Fire" starter set. No airbrush, no pigments, and nothing else that a budding Flames of War hobbyist might not have kicking around the house. Just some clean, simple paint jobs that can be done quickly, with an introduction into simple weathering and detailing. Tomorrow night I'll shoot the StuG and maybe even the Sherman as well.

I've also got a 40K project for the upcoming "Kindred" tournament that I'm itching to start, but I'm still waiting on models and bits to show up. Hurry up postman...!
Posted by deathkorps at 10:23 PM